on September 27, 2008
I haven't heard anyone say much about this yet, but during Friday night's debate, Senator McCain somewhat offhandedly said "Sure," he would vote for the Wall Street bailout despite its price tag of $700 billion. 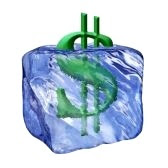 To pay for the Wall Street rescue, he cavalierly suggested the idea, "How about a spending freeze on everything but defense, veteran affairs and entitlement programs?"

As President, John McCain would freeze spending on those essential programs indefinitely while Wall Street companies get billions of taxpayers' dollars along with another $300 billion in tax cuts that he proposes for the wealthy.

I agree that we probably need to do something with the Wall Street crisis, but McCain's choice to sacrifice worthwhile programs that help thousands of Americans and keep us all safe on the altar of the free market is a very bad idea.