on February 08, 2007
It's well past time that Wabi-Sabi returned to it's roots, so we take a break from the cat fight and return to our regularly scheduled programming of posting pictures of the kids and family.

Here's a recent picture of the boys, having a fairly typical fun time. "CHEESE!!!" 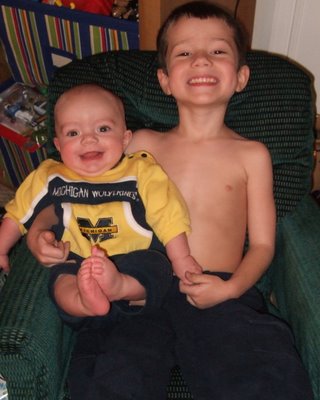 Jake is by far Jonah's favorite person in the world.

Next, I should warn you that the following picture might be a little scary for those who aren't prepared.

Proceed at your own risk... 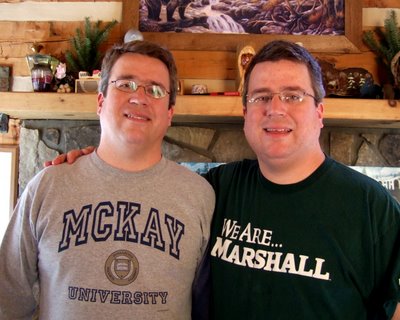 Yes, boys and girls, Wabi-Sabi has an identical twin brother. Oh the humanity!!!

Don't worry though, brother Tom is an engineer for Nissan who lives in Murfreesboro, Tennessee, so the chances of seeing us both at the same time are slim.

Tom is a conservative die-hard Republican, while I obviously am not, so I'll leave it to you to figure out which one of us is the "evil twin". :->
Family Jake Jonah