The flood followed the collapse of the #3 Pittston Dam when approximately 132 million gallons of black waste water rushed through Buffalo Creek hollow.

According to the WV Division of Culture and History,

"In the days preceding February 26, 1972, rain fell almost continuously, although experts later claimed this was typical for late winter weather in the area. Buffalo Mining officials, concerned about the condition of the highest dam, measured water levels every two hours the night of the twenty-fifth.

Although a Pittston official in the area was alerted to the increasing danger, the residents of the hollow were not informed. The company sent away two deputy sheriffs, who had been dispatched to assist with potential evacuations. Despite the lack of warning from company officials, some residents sensed the danger and moved to higher ground."

To this day, Buffalo Creek serves as a tragic reminder of the dangers that can occur when corporate earnings and profit outweigh concerns about safety.

When I see the pictures and images from Buffalo Creek, I can't help but think of the current situation with Marsh Fork Elementary School, which sits 400 yards downhill from a massive seeping man-made earthen dam holding back two BILLION gallons of toxic coal waste sludge. 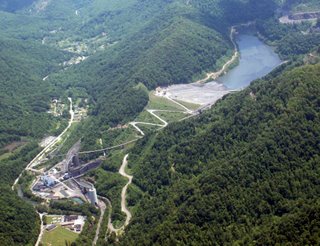 After seeing Buffalo Creek and the levees in New Orleans, it feels like it's only a matter of time until the children who attend Marsh Fork Elementary suffer an unimaginable tragedy of their own.

Will our elected officials and public policy makers take action or will they continue minimize concerns and echo the words of then Governor Arch Moore when, in response to the Buffalo Creek tragedy, he said,

"The only real sad part is that the state of West Virginia has taken a terrible beating that is worse than the disaster." (emphasis added)

That's real nice Gov, worry more about the state's image than about the lives that were lost.

With an attitude like that, it's no wonder that he accepted a $1 million settlement for the state's $100 million law suit against the Pittston Company days before leaving office.

On this 35th anniversary of Buffalo Creek, the question remains have we learned our lesson or have we just dodged the bullet?
Politics