Mitch Albom is an Idiot 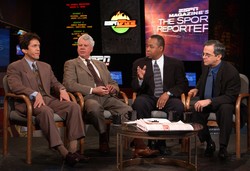 I just got done watching ESPN's "The Sports Reporters" and once again, Mitch Albom was criticizing the Big East football conference and all things that don't revolve around the Big 10 Conference.

So let me get this straight, having a college football playoff would somehow make the regular season meaningless. Yet it's OK that it won't matter who wins between OSU-UM? As long as it's close, they play again for the BCS title? How is that fair?

Albom and others keep complaining about the quality of play in the Big East, but the conference won 80% of its non-conference games - a better rate than the SEC, Big 10, Big 12, PAC 10, and ACC.

Then they cite strength of schedule, but those weren't exactly the Louisville Cardinals that Michigan struggled to beat this weekend. It was the powerful Ball State Cardinals.

But what about the strength of the Big 10 Conference schedule? There's no way that Rutgers could survive playing Big 10 teams that OSU and Michigan play right?

But wait a minute, who did Ohio State struggle to beat by 7 points (17-10) Saturday? Illinois. I seem to recall that Rutgers annihilated Illinois by a score of 33-0 earlier this year.

As for the remaining ACC apologists, Louisville killed Miami and WVU crushed Maryland which beat the top ranked team in the ACC, Clemson(?), on Saturday. Have fun rooting for Maryland or Wake Forest as they take the ACC banner to a BCS bowl, and be glad that the Virginia Legislature made you take Va. Tech. instead of Syracuse when you raided the Big East for quality teams.

A final thought for Mr. Albom, what would have happened to the Detroit Tigers this year if the decision about who plays for the championship was left "up to the voters"?

It seems to me that the magical seasons of Louisville, Rutgers and WVU (until Thursday) have a lot more in common with the Tigers, while Albom's beloved Michigan and OSU are the Yankees.

(By the way, since when does a self-respecting Michigan columnist praise OSU anyway?)

So the rest of the college football season, we'll hear more of this so-called debate.

Cal and USC will battle for the PAC-10 and which 1 loss team is better - even though Cal was crushed by Tennessee. 2 or 3 good teams isn't enough for the Big East, but it's more than enough for USC to get to the championship.

The same goes for the Texas-Oklahoma winner each year from the Big 12.

The ACC is proven to be a pretender, but if FSU or Miami had run the table no one would have compared them to the Big East.

The Notre Dame comeback against Michigan State was supposedly meaningful, but given MSU's record, I don't think so.

The SEC has given us a few good teams, but the last time I saw their champion on the field against the Big East champion, WVU was dismantling UGA in what was basically a home game for the Dawgs.

So, what is the answer? Settle it on the field!

A 16-team playoff would make tons of money and, contrary to popular belief, the games in November would be worth more not less.

As it stands now, we have the OSU-Michigan game and some other battles for conference titles in November. With a playoff, you would have tons of interest in the "bubble" teams to make the tournament. You would have bracket busters and all the other things that make March Madness so special. Heck, the remaining ACC games might even be interesting.

The other benefit, which can't be underestimated, is the fact that the decision to go to a playoff would cause those "covering" college football to actually talk about the games - instead of computers, rankings and style points.

So there you have it, $40 million to keep Mitch quiet (plus crown a true champion). I think we can find some investors for that proposal.
Sports