on November 26, 2006
I'm disappointed that Senator Russ Feingold has decided not to run for President in 2008. (Longtime readers may recall that I endorsed his candidacy two years ago following the 2004 election.)

Despite my disappointment though, I am still going to announce my Presidential pick early -- not for 2008, that would be too easy.

Nope, I am looking farther down the road, and I've already endorsed a candidate for the 2044 election... 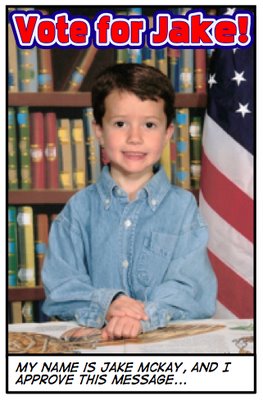 After seeing Jake's school picture, I couldn't help but think that he looks like a great candidate.