on October 04, 2006
Last weekend, I asked "How Fox Would Report Mark Foley's Resignation if He Were a Democrat?" 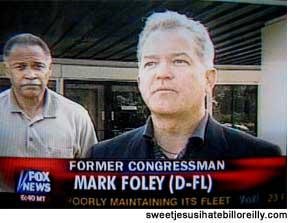 Well, apparently the answer for Bill O'Reilly and Fox is just to pretend that Mark Foley really is a Democrat.

During the O'Reilly Factor last night, while Bill was criticizing Foley for his actions, the screen display identified the disgraced former Congressman as a Democrat (D-FL), instead of his true party affiliation as a Republican.

I guess I shouldn't be surprised, it's just one more example of Fox's "Fair & Balanced" coverage.
Politics