on October 02, 2006
Jake's class is completing a unit on nursery rhymes this week, and he has been really cute reciting classics like Humpty Dumpty and Mary Had a Little Lamb.

Then a couple of days ago, on the way home after dinner, I heard Jake saying the following from the back seat... 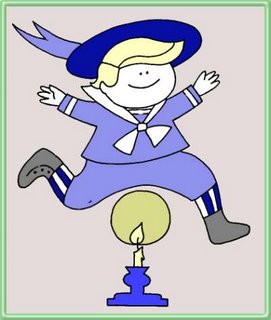 After a long pause, then Jake said,

"It was good that Jack was nimble
And Jack was quick.
Because if he wasn't, he might've
Burned his....

He was very tickled with himself, as he said one of his favorite "bad" words -- "butt". (heh, heh)

Of course, I was laughing too, but it was mostly from a sense of relief since I was scared Jake was going to say that Jack burned his... something else. (heh, heh)