The Most Exciting 12 Minutes in Sports

on July 03, 2006
Today marks the pinnacle of National Hot Dog Month and for the year in competitive eating as competitors from around the world will gather in Coney Island for Nathan's Coney Island Hot Dog Eating Contest.

Around the world of sports, people are wondering whether this is the year that the world's most impressive winning streak will end. 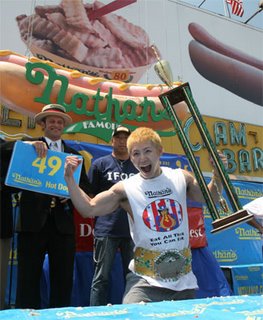 No, I'm not talking about the Atlanta Braves streak of 14 consecutive Division Championships. I know that streak is going to be broken this year. @#$%*&!!!

I'm talking about the world's most dominating athlete, Takeru Kobayashi, who has devoured the competition to win the World Championship at Nathan's Coney Island Hot Dog Eating Contest for a record five years in a row.

However, this year the competition is expected to be red hot as a young superstar named Joey Chestnut is hoping to roast the defending champion over the coals and prove the veteran Kobayashi can't cut the mustard any longer.

Then in May, Chestnut stunned the world setting a new American record eating 50 hot dogs and buns in 12 minutes at the Las Vegas qualifier for the July 4th championship.

The record breaking performance caused International Federation of Competitive Eating (IFOCE) President Richard Shea to exclaim, "This is the greatest thing to happen in the history of American sports! Joey Chestnut's accomplishment may change the course of a nation!"

With the victory, Chestnut joined Kobayashi as only the second person ever to break the 50 HDB (hot dogs and buns) barrier and firmly planted himself as Kobayashi's closest competitor.

Oddsmakers have established Kobayashi as the clear favorite to win with 1/3 odds (for every 3 dollar bet, you would win 1 dollar) and Chestnut is next closest at 3/1.

Of course, I would never support wagering or gambling. However, the championship should be a classic for the ages.

Will Kobayashi follow in the footsteps of champions like Michael Jordan, John Elway and Lance Armstrong and defend his championship?

Will Joey Chestnut bring the coveted crystal and gem-bedazzled "Mustard Belt" back to the United States?

How many minutes of the broadcast will be dedicated to Eric "Badlands" Booker's rapping talents?

Will Sonya Thomas, the self proclaimed "Black Widow" of competitive eating, kill and eat Kobayashi during or after the competion?

Will any of the contestants request that Nathan's prepare genuine West Virginia hot dogs complete with slaw and wrapped in wax paper?

Will anyone be disqualified for the dreaded "reversal of fortune"?

For the answers to these burning questions and many others, tune in to ESPN at 12:00 noon for the pre-game festivities followed by the athletes taking a bite out of the competition beginning at 12:40 pm.

Whoever wins, the 91st Annual Nathan's Coney Island Hot Dog Eating Contest will be relished for years to come.

As you can probably tell, this post has whet my appetite, and I am chomping at the bit for the competition to be served.


UPDATE:
The results are in, and Kobayashi has kept his streak alive. He won his 6th consecutive world championship and broke his own world record in the process by eating 53 3/4 hot dogs and buns. His previous record was 53 1/2, set in 2004.

Joey Chestnut made it extremely close -- leading by as many as 2 hot dogs before fading slightly with about 3 minutes to go. He also broke his own American record by eating 52 HDBs -- losing by only 1 3/4 hot dogs to Kobayashi.

While Chestnut proved he is definitely a force to be reckoned with, Kobayashi proved once again that he has the heart (and stomach) of a champion.