on June 20, 2006
Jake, Carol and I went to see Nacho Libre last Friday. It was a fun flick. Who wouldn't enjoy following the adventures of an humble monk who becomes a luchador wrestler to raise money for orphans? 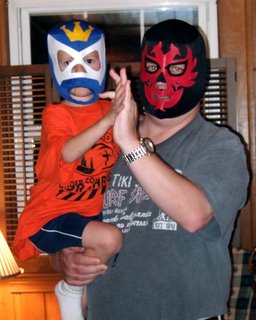 The most fun was Jake and I wearing our wrestling masks that we bought in Old Town in San Diego. We were the center of attention, and Jake had a GREAT time.

We had a few strange looks at Max & Erma's for dinner, and the movie going crowd was fun.

The guy selling concessions tried to get me to pay with credit. He said he wanted to ask for ID to solve my secret identity. Then the ticket taker said "Let me guess, you're going to see Garfield?" Ha!

Based on the number of people asking where we got our masks, I could have made a small fortune selling them. If I really was Nacho, I would have bought some extra masks from Archie McPhee and sold them to raise money for our church's youth group.