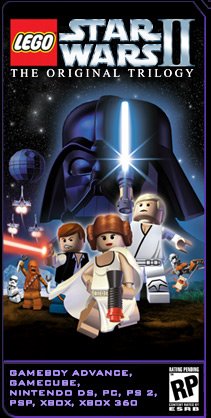 LEGO Star Wars II: The Original Trilogy is due out in September.

After spending years being consistently disappointed by Star Wars video games (aside from the classic Atari 2600 game that featured the Ice Planet Hoth) I was blown away last year when we bought the original LEGO Star Wars game for PS2. I bought it for Jake, but we both have had a blast playing it.

The gameplay for the first installment is great. The storyline follows Episodes I, II, and III, and it's alot of fun including great reactions from the characters.

The cooperative play is another huge plus, because the second player can drop in and out of the game as needed without starting each stage over. This is great for us, because Jake can play through most of the levels, but if he gets stuck I can join in.

It's also hard to overstate how much fun it is to slice Jar Jar Binks into LEGO pieces with your light saber.

The trailer for the new game looks great too. They seem to have maintained the personality and positives from the first game while adding some new twists such as letting you piece together new characters, just like LEGOs.

Add to that the fun of taking Luke Skywalker, Han Solo, Chewbacca, and Princess Leia through their battles against Darth Vader and the Empire, and the game seems like it will be an instant classic.

The game due to be released in early September, soon after Baby McKay Episode II makes his world premiere.
Uncategorized