John Raese is a Liar

on June 23, 2006
The Republican candidate for US Senate, John Raese, has started his campaign for the general election by airing an attack ad accusing Senator Robert Byrd of voting against the troops. (You can hear it here.)

Despite promising to run a positive campaign, he has started slinging mud already. The ad is a misleading, dishonest attack that repeats the same false attack that the National Republican Senatorial Committee ran last summer and during the 2004 Presidential Campaign.

No one should be surprised that Raese has already started twisting the truth since his lead campaign consultant is Keith Appel, the PR guy who produced the Swift Boat smear campaign against John Kerry.

As I mentioned last summer when the original ad ran, this attack is blatantly dishonest and obviously from the same playbook that the Republicans have been using over and over again. 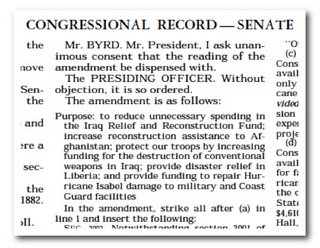 It's a ludicrous and misleading claim, because Page S12779 of the 2003 Congressional Record, 10-17-03, clearly documents that Senator Byrd proposed an amendment to the bill that would have provided INCREASED funding for the troops. The Republican-majority Congress voted down his amendment. Sorry John, but according to "the Congressional Record - the facts tell an entirely different story" from your ad.

Senator Byrd wants to put the money where it would do the most good in protecting soldiers. He even proposed an amendment that would have increased the amount of money going to body armor and securing conventional weapons, which are responsible for most all of the deaths of US soldiers. Unfortunately, Republican Senators defeated the amendment resulting in LESS money for body armor.

Senator Byrd wanted to spend more on the things soldiers need and less on things like:As Senator Byrd noted in his remarks on the amendment (from the Congressional Record),

"According to the Congressional Research Service, if we purchased those petroleum products at market prices, it would cost $704 million. I wonder who is profiting from this sweetheart deal at the U.S. taxpayers’ expense."

Senator Byrd wanted more money for protecting our troops, not less. His amendment even mirrored the Republican-controlled House Appropriations committee which found $1.65 billion in questionable and unnecessary expenditures.

As the Senator noted,

"The President’s budget request includes only $300 million in a catchall account that lumps munitions security in with critically needed bulletproof vests and the rapid fielding of technological advances. This is the same budget request that includes $697 million for sewage improvements in Iraq, $150 million for the aforementioned garbage trucks and landfill sites, $200 million for an America-Iraqi Enterprise Fund, and $110 million for something called Market Oriented Specialized Training."

Senator Byrd proposed $600 million more to secure and destroy conventional weapons in Iraq, which would have tripled the amount that the President proposed. Yet John Raese has the gall to claim he voted against body armor and voted against our troops?

Senator Byrd supports our troops and wants to protect them from the ammunition that is killing them. The President and John Raese apparently want to buy garbage trucks and import oil to Iraq. Apparently, garbage trucks are more important to John Raese than body armor.

Stating that Senator Byrd voted against funding when he proposed an amendment to increase that funding is misleading, dishonest and offensive, yet it's typical of the attacks on which Keith Appel and his colleagues have built their careers.

It's unfortunate that the first ad after winning the Republican primary from the Raese campaign is not in support of something. It's entirely an attack. So much for a positive, issue-based campaign that John Raese promised in May.

The good news is that Senator Byrd is responding quickly to refute the dishonest attack. He has already released an ad that affirms his record of support for our military both in Iraq and after they return home. You can listen to Senator Byrd's ad here.

Ultimately, voters should heed one piece of advice from John Raese's ad and take a look at the Congressional Record because "the facts tell an entirely different story" from the distortions that John Raese and his band of Swift Boaters would have you believe.

Coming soon... I was recently the victim of a push poll call from the Raese Campaign. Stay tuned for more.
Jack Nuts Politics