on June 09, 2006
Greetings from the 2006 Session of the West Virginia Annual Conference of the United Methodist Church. 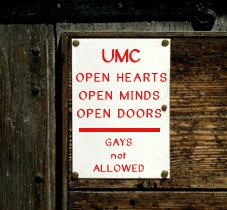 Sadly, I report to you that a resolution affirming the Council of Bishops' letter of dissent from the Judicial Council of the United Methodist Church's Decision 1032 (click here for some background information) was rejected by the West Virginia Annual Conference at Friday's session.

The text of the resolution was:

Submitted by the WV Chapter of the Methodist Federation for Social Action
WHEREAS, the United Methodist Church (UMC) has historically welcomed into membership “all persons without regard to race, color, national origin, status, or economic condition” per Article IV of the Constitution;

WHEREAS, in its Decision 1032 the United Methodist Judicial Council supported one UMC pastor’s refusal of membership to a person seeking membership because of the “aspiring member’s sexual orientation and practice,” and overruled decisions by the district superintendent, bishop, and the Annual Conference clergy session requiring that the pastor welcome this individual into membership;

WHEREAS, the UMC bishops unanimously stated in a November 2, 2005 Council of Bishops Pastoral Letter that “homosexuality is not a barrier [for membership], ...and ...the General Conference has clearly spoken through the denomination’s Constitution on inclusiveness and justice for all as it relates to church membership”; and quoted from paragraph 161g of the Book of Discipline: “...God’s grace is available to all, and we will seek to live together in Christian community. We implore families and churches not to reject or condemn lesbian and gay members and friends. We commit ourselves to be in ministry for and with all persons”;

WHEREAS, the Council of Bishops’ Pastoral Letter (Nov. 2, 2005) further affirmed “our Wesleyan practice that pastors are accountable to the bishop, superintendent, and the clergy on matters of ministry and membership”;

WHEREAS, the United Methodist Church has implemented the advertising strategy “Open Hearts, Open Minds, Open Doors” which includes a “Diversity Expression that by communicating the myriad beliefs and cultural diversity of the church, this expression invites anyone to attend, wherever they are on the journey toward finding a spiritual home” — United Methodist Communications Website: http://www.ignitingministry.org/advertising/diversity.aspx;

WHEREAS, John Wesley preached that the church is the means of dispensing the grace of God to all who seek it; Romans 15:7 says “Welcome one another, therefore, just as Christ has welcomed you;” Mark 10:14 says “But when Jesus saw this, he was indignant and said to them, ‘Let the children come to me; and do not forbid them; for of such is the kingdom of God;’” 1 Corinthians 12:13a says “For in the one Spirit we were all baptized into one body”; Galatians 3:28 says “There is no longer Jew or Greek, slave or free, male or female; for you are all one in Christ Jesus;” and John 13:35 says “Everyone will know that you are my disciples, if you have love for one another;”

THEREFORE BE IT RESOLVED that the West Virginia Annual Conference of The United Methodist Church affirms the Biblical and historical principle of open membership to all who seek to be disciples of Jesus Christ; and

BE IT FURTHER RESOLVED that we will pray for the Judicial Council, the General Conference, and all United Methodists as we continue in discernment and dialogue around issues of “open hearts, open minds, open doors.”

The resolution was submitted by the West Virginia Chapter of the Methodist Federation for Social Action (MSFA).

Sensing the divisive nature of the debate, Bishop Lyght allowed only 2 speeches in favor and 2 speeches in opposition to the resolution. (Personally, I felt there should have been more.)

Those opposed to the Resolution cited some MSFA materials to claim that the resolution was "really intended" as part of a larger plan to circumvent the Church's positions regarding homosexuality, and the speaker said we cannot "accept sin".

Another speaker criticized the resolution for citing a few scriptures to support such thinking, and then she proceeded to prooftext her remarks opposing the resolution.

Speaking in favor was a respected older clergy who cited Jesus' words to the woman at the well; however, at the end of his remarks he said that Jesus told her to "go in peace" as a chorus of voices "corrected" him loudly saying that Jesus said to "go and sin no more!"

The remaining speech in favor was made with good intentions by a younger woman who is the daughter of 2 UMC pastors in the conference. She said that the issue is a big reason why there is a disconnect from the younger generations and we should pass the resolution to help reach out to young people. I appreciate where she was coming from, but it wasn't the most persuasive argument.

It was very disappointing. Sadly, the vote was not even close enough to warrant a division of the house to count votes individually.

The resolution was entitled, "Open Hearts, Open Minds, Open Doors", but given the action of the WV Annual Conference --apparently hearts, minds, and doors are closed in West Virginia.

We'll see how the conference feels about Jesus' radical teachings regarding peace versus war at tomorrow's session (Saturday).

Peace and grace to you,