Where in Huntington is Matthew McConaughey?

on April 05, 2006
It's official -- the city of Huntington has officially gone Hollywood.

Filming began this week for "We Are... Marshall", a movie based on the Nov. 1970 plane crash that killed 75 Marshall University football players, coaches and community members.

The movie follows the events surrounding the crash and the season that followed including a miracle win against Xavier.

The movie is a big production slated for release in December and features Matthew McConaughey and Matthew Fox as two of its biggest stars.

For dinner last night we decided to stop by Chili Willi's, and on our way we were surprised to see the roads were blocked.

We had to park a couple of blocks away, but we didn't have any trouble getting in to the restaurant. From our booth by the window, we could see the entire production as they filmed the scene outside the Greyhound Bus Station.

Matthew Fox wasn't LOST, he was literally across the street kissing January Jones goodbye several times. It's hard to see from my camera phone pictures, but it was alot of fun and we could see everything very well from our booth. (Carol has posted pictures here and here.) 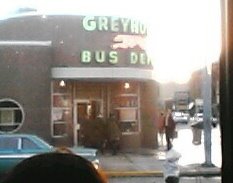 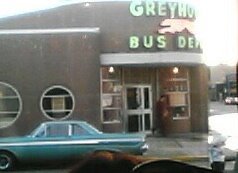 (Matthew Fox exits the Bus Station.)
Everyone in town is excited about the movie and the filming on location.

McConaughey has generated the most stalking buzz and there is even a website WhereinHuntingtonisMatthewMcConaughey.com that's dedicated to local sitings around town.

Where in Huntington is Matthew McConaughey? I'm not sure, but I think Carol will be sure to find out. Stay tuned!
We Are Marshall