After a rocky season, they have has taken a page from last year's WVU men's team and made a nice run in the Big East tournament. 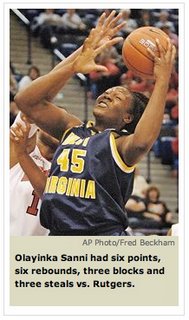 They've won 3 games so far and knocked off the #1 seed Rutgers last night. They play perennial champion UConn tonight at 7:30pm on ESPN2 with the winner getting the automatic bid to the NCAA tournament.

It will be an uphill battle, especially since WVU is playing without its leading scorer, Meg Bulger, but for a team that has already beaten the #1 seed, the question now is "why not West Virginia?"