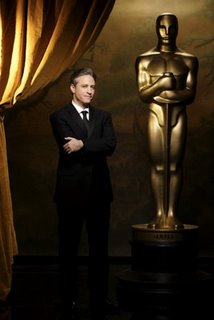 Tonight the Academy Awards will be presented, and I am particularly looking forward to Jon Stewart hosting.

Ian has posted his predictions over at Fried Rice Thoughts and has actually seen the movies nominated for Academy Awards this year. Meanwhile, Hoyt has a nice post about the Oscars and changing movie viewing habits of parents with young kids.

I am generally in the same boat as Mr. Donutbuzz this year, and sadly I haven't seen any of the movies nominated for Best Picture. Carol has seen a couple, but with the exception of a couple of videos and King Kong, all of my trips to the movies this year have been with Jake.

As a result, here is the comprehensive list of movies that I watched in 2005. It's quite an impressive list.It should be an interesting broadcast. Personally, I think the battle for Best Performance by a Zebra is the closest contest of the night. It's definitely a toss-up between Stripes (Racing Stripes) and Marty (Madagascar).
Movies