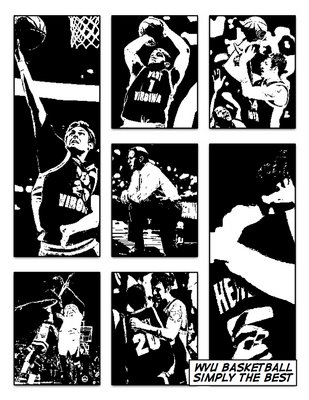 I am VERY disappointed - not by the loss as much as the fact that I won't get to see Mike Gansey, Kevin Pittsnogle, Patrick Belein, Joe Herber, and JD Collins play on the same floor again.

This group of seniors has exceeded all expectations during the past two years. With a bounce or two in the other direction, they might have made the Final Four last year, and they had a good shot again this year.

The team played with such heart and determination. They were the essence of Wabi-Sabi - combining youthful enthusiasm and energy with wisdom and maturity. They were each selfless making an extra pass and doing all the little things it takes to win, but each was extremely talented individually too. Their style of play with backdoor cuts and deep 3 pointers, combined with a stifling unusual 1-3-1 defense where the shortest player on the court often guarded the opponent's center was a joy to behold.

On and off the court the team had none of the problems you hear about far too often. Joe Herber is a 4.0 student despite being from Germany and speaking English as a second language. Kevin Pittsnogle got married and had a baby, and still managed to graduate in only 3 and a half years. Patrick Belein went from the walk-on coach's son to the best 6th man in the Big East conference - setting a school record for 3 pointers along the way.

Even in defeat they showed their resolve - coming from way behind against a team that is one of the best in the country to tie the game with only 5 seconds to play. Martinsburg, WV's own Pittsnogle made the deep 3 pointer to tie the game despite being knocked out of the game with a bloody nose just moments earlier.

The team gave it their all. They have made all of us proud to be WVU fans and captured the attention of fans across the country.

As a tribute to the best "team" in college basketball, enjoy this song, "Simply the Best", which was produced by WVAQ in Morgantown.

Also, if you haven't seen the brilliant WVU version of the Sprint Super Bowl commercial, then you should definitely Click Here.

Thanks for all the memories. It will be fun to see what the next chapter holds.

By the way, does anyone else think that Michelle Gansey McKay would be a good name for a girl? Carol, what do you think? Just checking...

Hattip to ESPN's Andy Katz for the headline.
Wabi-Sabi WVU