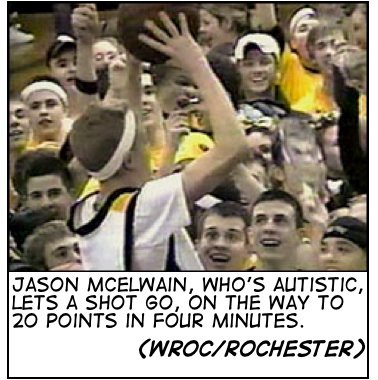 I just heard the story of Jason McElwain, an inspiring basketball player from Greece Athena High School in Rochester, N.Y.

McElwain came off of the bench where he served as manager for the team.

In his team's final regular season game, Jason was "hot as a pistol" in helping lead his team to victory.

If you enjoyed watching the crowd rushing the floor after last night's WVU victory against Pitt, you will love the video of this game.

Kudos to the coach for getting Jason into the game. Given the way he shot the ball, Jason may be coming off the bench much sooner than anyone thought.
Sports