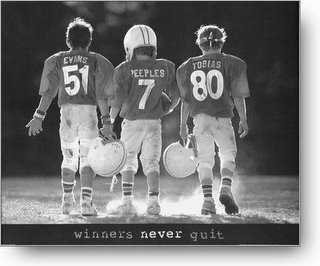 This is a great weekend for pro football with each of the Wild Card games over the next 2 days.

Being the fearless prognosticator that I am, I have decided to share my predictions along with a possible headline for the game.Washington vs. Tampa Bay
Saturday @ 4:30 pm
Prediction: Tampa Bay
Headline: Bucs Win Overtime Thriller

What do you think?

UPDATE:
Well, I am 0 for 2, although if the refs had made the right call on the Bucs fumble that was returned for a touchdown (he was on the ground in a pile of players from both teams when he recovered) or if the receiver holds on to the catch in the end zone then my OT prediction might have panned out.

Byron played well, but needed his receivers to make a catch when the ball hits them in the hands, and maybe something resembling a running threat would have been nice.

Who would have thought that Leftwich would have been better off getting drafted by Cincinnati after all?

UPDATE II:
The Giants game makes me 0 for 3. Plus I apparently cursed Chris Henry by including him in the headline, since he's now out of the game with a knee injury after making a big catch for over 50 yards.

Thankfully, I didn't make a prediction in the WVU game since they came back to beat 'Nova in today's Big East basketball game.