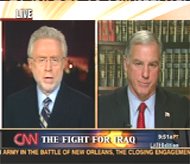 When Wolf Blitzer tried repeating the Republican talking points that Democrats also took money from indicted lobbyist, Jack Abramoff, Dean discredited them for exactly what they are... a lie.

BLITZER: But through various Abramoff-related organizations and outfits, a bunch of Democrats did take money that presumably originated with Jack Abramoff.

BLITZER: What about Senator Byron Dorgan?

DEAN: Senator Byron Dorgan and some others took money from Indian tribes. They're not agents of Jack Abramoff. There's no evidence that I've seen that Jack Abramoff directed any contributions to Democrats. I know the Republican National Committee would like to get the Democrats involved in this. They're scared. They should be scared. They haven't told the truth. They have misled the American people. And now it appears they're stealing from Indian tribes. The Democrats are not involved in this.

BLITZER: Unfortunately Mr. Chairman, we got to leave it right there.

Crooks and Liars has the video including Wolf's stunned silence when faced with the facts.

Of course the facts don't matter much to the Republican talking heads.
Politics