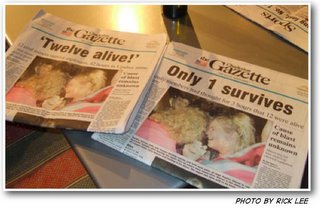 Upon waking up this morning, the reports are that there was a "miscommunication" and tragically, only one miner has survived.

I don't understand why the Governor's office or other officials couldn't have clarified the situation during the 3 hour period when family members were informed and under the impression that there were "12 alive!"

I am not suprised that the coal company would mislead people, but the Governor or his office should have communicated to the media at least privately that reports were unclear or conflicting rather than continuing the charade that everything was OK.

Reports are that they knew within 20 minutes that the initial reports were inaccurate, yet no one said anything to temper the enthusiasm for almost 3 hours.

Miraculously one miner, Randal McCloy, Jr., has survived. Tragically, 12 miners are now with God, instead of with their families.

My prayers are with all of the families.
In the news