Allow me to introduce...

on January 11, 2006
the next target in the White House's continuing smear campaign: 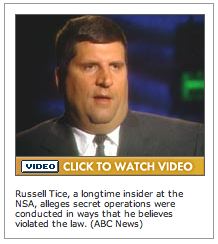 Russell Tice who formerly worked for the National Security Agency.

Tice is the NSA Whistleblower who alleged the administration illegally spied on American citizens.

I am amazed that people are not more outraged by this obvious breach of the public's trust.