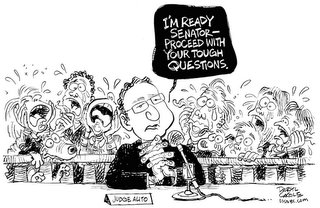 You have probably seen the coverage of the SCOTUS confirmation hearings and the claims by Sen. Graham (who made Judge Alito's wife cry) and commentators, such as WV's own Don Surber, that Judge Alito was "under seige" or being attacked.

Please remember that this response is part of a well-worn Republican Strategy (#47?) to claim persecution and unfair attack when faced with a challenging situation.

Allow me to introduce the following:

Exhibit 1: "The War on Christmas"
Exhibit 2: "Liberal Bias in the Media"
Exhibit 3: "Activist Judges taking God out of our Schools"
Exhibit 4: "Pick one: Gays, feminists, the ACLU or MoveOn.org"
Exhibit 5: "Being asked to clarify responses to a job application."

Gasp! The horror of it all.

As a straight, white, Christian male, I don't know how I will ever withstand all of these attacks. < / sarcasm>

"Well, Senator, I have wracked my memory about this issue, and I really have no specific recollection of that organization (Concerned Alumni of Princeton)."

He is clearly being dishonest. Certainly, he is not telling the truth, the whole truth and nothing but the truth.

However, when he is asked about it, then it is seen as an attack?!

He's got the votes to be confirmed, the least he can do is be honest.

He should be thankful that he's not in Donald Trump's boardroom on the Apprentice, then he would be asked some tough questions.
Jack Nuts Politics