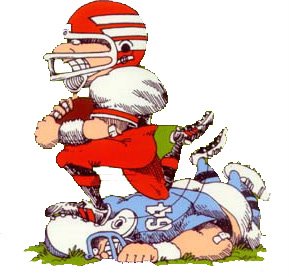 Today marks the opening round of the playoffs in the inaugural season of the Hillbilly Bloggers & Friends Fantasy Football League.

After a slow 1-3 start my team, the Wabi-Sabi Warthogs have been on a winning streak finishing the regular season in First Place.

I face "I am Fez" this week in the Final Four, and despite my regular season success, I need to win. I need my big players, Rudi Johnson, Clinton Portis, Marvin Harrison, Anquan Boldin and Chris Chambers to have good games.

The other Semi-Final match-up pits Ian's Swift Sweaty Men against Carol's GrieseGrimeyGo4Guts. They split their regular season games, so this is the proverbial rubber match. The fact that they are both huge University of Michigan fans makes the match-up even more interesting.

In the consolation round, Hoyt's Overpaid Free Agents battles the Spinsters, who have been on a roll, winning 3 out of 4 to close out the regular season. Meanwhile, Brett Favre single-handedly eliminated the Overpaid Free Agents from playoff contention throwing more passes to the opposition than he did to his own receivers.

Can the Overpaid Free Agents rebound from a crushing close loss last week that eliminated them from the playoffs to make a run in the consolation round?

Who will win the Battle of Michigan?

Will the Warthogs wilt under the pressure of high expectations?