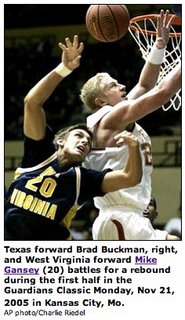 WVU had a GREAT game taking the lead against the number 2 ranked team in the country, the University of Texas.

I was estactic as the Mountaineers seemed to pick up right where they left off with March Magic last year.

Unfortunately, in my excitement in the last minute of the game, I inexplicatively switched seats in my living room!? Why, oh why?

After sitting on the love seat and enjoying 38 minutes of exciting basketball with Mike Gansey looking like a Wooden Award winner, I rose in excitement and cheering in anticipation of what seemed to be a sure victory.

Then when Johannes Herber missed his free throw, I sat ON THE COUCH. What was I thinking?!

Everyone knows you don't switch seats when your team is on a roll. But no, I forgot and sat on the f'n couch. I am such an idiot!

I had a chance to make things right when I rose to my feet in anger when the ESPN2 feed switched to Monday Night Football while Pittsnogle was shooting the last free throw. But by then, the damage was done.

I never sat back down in the right seat, Pittsnogle missed the shot, and WVU ended up losing by 1 point!? (Link to Story)

WVU played a GREAT game, and I accept all responsibility for the loss. They deserved better, and I let them down.

The good news is that these early season games are really helpful for the team, and for us as fans to work out kinks like these before the Big East conference games begin and March Madness follows.

Now, I need to get to work on an updated seating chart for my living room. I recommend everyone does the same before tomorrow night's game against Kentucky and definitely before Thursday's Backyard Brawl against Pitt.

NOTE: There is a fragile balance between seating location, clothes, snacks and beverage choices when watching a game. Unless you are a fan of the Pitt Panthers or the NY Yankees, I recommend that you pay close attention to what works best for your team.

UPDATE: My credentials may be revoked... I missed Tuesday's game with UK completely. I could have sworn it started at 10:00pm, but it started at 7:00pm and I missed it. The result of my oversight, a 14 point loss for WVU. :(
WVU