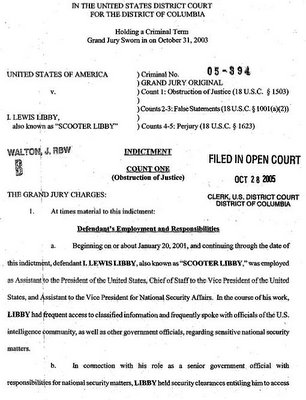 Almost two years after beginning an investigation into the illegal leak of the identity of CIA agent Valerie Plame, the first indictments have been issued. Vice President Chief of Staff, Will Bailey Scooter Libby, was indicted on charges of obstructing justice, making false statements and perjury.

The talking heads are comparing it to Clinton's impeachment or Martha Stewart as some type of technicality, but they are wrong. This is much worse.

Those legal troubles had nothing to do with national security. On the contrary, this scandal is directly related to it.

It's all too easy to forget that the scandal began with President Bush lying to the American people during his State of the Union address claiming that Saddam Hussein tried to purchase Uranium in Africa. Ambassador Wilson had disproven this claim the previous year. References had been taken out of the President's remarks at earlier speeches, yet the remarks were included back in the State of the Union address leading up to the US invasion of Iraq.

When Joe Wilson went public with his findings, the White House sought to discredit and punish him by diverting attention to his wife. As part of this campaign they began shopping stories to journalists including Bob Novak who was the first to publish the identity of Valerie Plame as a CIA agent.

We now know that the President lied in the State of the Union. White House staff lied about the leak. And now, according to the evidence, they lied under oath to the FBI and the Grand Jury.

And before you make the comparison to Clinton, lets remember that he lied in response to questioning about sex. These lies are about leaking the identity of a CIA agent and misrepresenting foreign threats as a justification for war. A war that has now cost 2,000 American lives. That's much worse than Clinton lying about his relationships with women (however, seedy they were), Martha Stewart lying about insider trading (however, greedy she was), and even the Watergate break-in to the Democratic National Committee Headquarters (however, corrupt that was).

The actions of Scooter Libby and others in this White House are truly reprehensible.

But wait, the conservative pundits say Fitzgerald didn't charge anyone with the biggest crimes. Well, it's clear that Libby was obstructing the investigation. As a result, the water is sufficiently muddied to protect whoever it is that he's protecting.

Having watched the lengthy news conference that Special Counsel, Patrick Fitzgerald, conducted today, it is clear that he is not pursuing a witch hunt or interested in partisan politics. He answered every reporter's questions for more than an hour and resisted every attempt to sling mud or comment on other aspects or targets of his investigation. His discipline in sticking to his message and the facts presented in the indictments was exceptional. We are fortunate as Americans to have him in such a substantial position.

It will be extremely interesting to see what develops next. Some have speculated that Fitzgerald's history indicates that he works his way up the food chain when prosecuting major cases. Given that he has just indicted one of the most powerful men in America, I am curious who else may be next.

If Scooter Libby offers additional testimony as part of a plea bargain, more indictments seem likely. On the other hand, if he keeps quiet then he is facing up to 30 years in prison, which can't be a very attractive option.

His loyalty at the expense of his own self interest is surely going to be tested. Making matters worse for Libby are the increasing comments, often made to distract attention from the actions of the President and Vice President, that Libby was just stupid to say the things he did.

In addition to the strategy of blaming Ambassador Wilson, Special Counsel Fitzgerald, the press, and others, there is a new push to blame Libby as acting haphazardly and ignorantly on his own. Given how united this White House has been, I don't believe there is any way that he acted alone. If the White House expands the blame game to include Libby, then his loyalty and willingness to stay quiet will be tested even more.

If Mr. Libby starts cooperating and stops obstructing, then things will get even more interesting. Stay tuned.
In the news Politics