What West Virginia Can Learn From the Boston Red Sox

or What Manny Ramirez, Shaquille O'Neal, and Bob Byrd Have in Common... 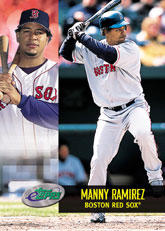 It looks like the Red Sox have learned their lesson.

Despite rumors flying about an impending trade of Manny Ramirez, the Red Sox have decided not to trade the future Hall of Famer. It appears the Red Sox have finally learned that the best trade is often the trade you don't make.

Unfortunately, the Los Angeles Lakers didn't heed this advice, trading their most valuable player, Shaquille O'Neal, to the Miami Heat in exchange for 3 players hardly anybody has heard of. The results, the Lakers ended up losing more games than the LA Clippers and missed the playoffs, while Miami almost won the Championship for the first-time in franchise history.

What is the lesson?

You don't trade your most valuable players, especially not for an unproven rookie. It may seem like you made a good deal at first, but a bad trade can have lasting results.

Next year, West Virginia voters will have a chance to choose between a proven star, Sen. Robert C. Byrd, who has demonstrated his value to the state time and time again, and an unproven prospect, Rep. Shelley Moore-Capito. The writers will talk about the potential of Rep. Capito, but voters should know that "trading" Senator Byrd would be no better than trading Manny for Aubrey Huff, or Shaq for those other guys.

Capito has been working in the minor leagues and has even had some success, but the US Senate is the Major Leagues. West Virginia can't afford to risk trading a perennial MVP candidate for a prospect who recently admitted,

"I'm not sure I completely understand (the federal budget process) yet myself."

That's like saying, "I can't hit a curve ball, but I'm working on it."

We can't afford to wait for someone to learn at the Major League level.

You don't have to take my word for it. Ask the fans in Los Angeles, which player do they wish they still had on their team?
Politics