Jeff Francoeur - Rookie of the Year 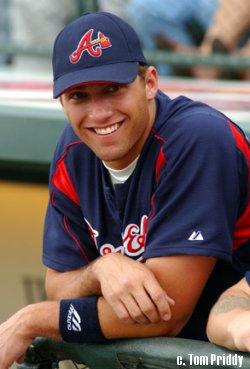 The Atlanta Braves are in first place and their ascent in the standings has coincided with the arrival of a great rookie outfielder Jeff Francoeur, #7.

He is on a tear and hit another homerun on Sunday. He reminds me of Dale Murphy, who should be in the Hall of Fame, by the way.

The only problem for Jeff is his lousy nickname. The veterans have called him "Frenchy" which seems like hazing to me.

One of the Atlanta radio stations is sponsoring a contest to pick a new nickname. You can enter here, or leave a suggestion in the comments, so I can win the prizes.

I hope Jeff fulfills the promise of his first month in the major leagues. So far, he looks like he will be wearing a Braves uniform for the next 15-20 years.

My fingers are crossed that his career will be closer to Chipper Jones and Andruw Jones the last great Atlanta rookies, and not the legendary Brad Komminsk.
Braves