on July 20, 2005
I thought I might have been overly sensitive when I got frustrated with President Bush's expressions during his Supreme Court announcement, Tuesday night.

He seemed to be repressing his trademark smirk as if he had some inside jokes included in his remarks. I really hate it when he gets into his playful banter with reporters, "heh, heh".

Then I saw these pictures. 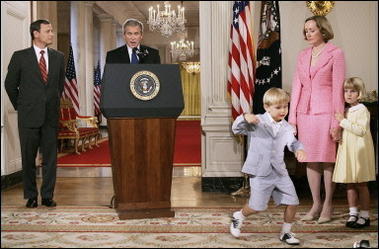 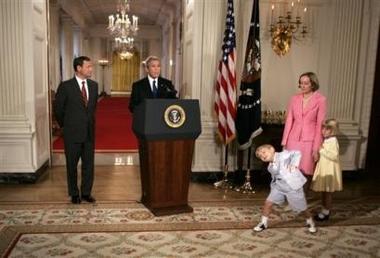 It turns out that the young boy is Judge Roberts' 4-year old son, Jack, who took the opportunity to get his groove on in front of the cameras.

As the father of my own 4-year old boy, all I can say is at least Jake never tried to upstage Dad in front of a national audience... yet.

The Political Teen has the video here.
In the news