The Plame Game of Clue 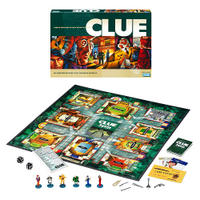 Paul Feig invented a new game, The Valerie Plame Game of Clue based on the classic board game.

Instead of the board being a representation of a mansion, the board is a map of Washington, DC. Players are encouraged to use their love of intrigue and deduction to figure out who is Bob Novak's (and Judith Miller's?) second source for the Valerie Plame leak is.

"... Colonel Dick Cheney, in the Vice President's Office, with a telephone."

From the comments, several people think that UN Ambassador nominee, John Bolton, is another likely suspect.

From today's Meet the Press, we learn that Dick Cheney's Chief of Staff, Lewis "Scooter" Libby, was the second source (along with Karl Rove) for Matthew Cooper's article in Time magazine, but there is no way that he was the mastermind.

So, my fellow sleuths..

What do you think? Who did it? Where? With what weapon?
Politics