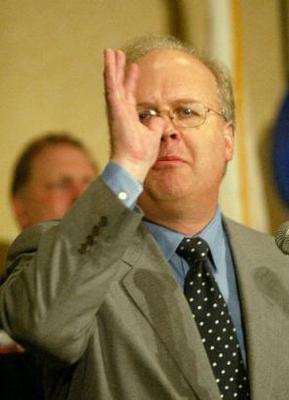 Tim Grieve has posted a good summary of the status of the Karl Rove's legal defense and denials regarding whether he identified an undercover CIA operative for political gain.

The key is that Rove apparently never called her by name - he just referred to her as Joseph Wilson's wife.

That may be enough to protect him from a perjury charge, but it's obvious that he intended to identify her as retribution for Joseph Wilson's statements that Bush lied in his State of the Union address.

You remember that lie right. It's been lost in all the discussion of Valerie Plame and Bob Novak. But lets not forget that our President lied to the United States Congress and the United States people, when he said that Saddam had tried to by uranium in Niger, "we can't afford to wait for proof to come in the form of a mushroom cloud". This was the big lie, Rove's dishonesty came next.

To my dismay, this morning I looked at the scale and saw a frightening number... 241.5 !? Yes, dear readers, Wabi Sabi has done got fat. :( Well, in an effort to put some accountability to my need to lose some weight, and also to do my part for the most important election of my life, I've decided to begin the Wabi Sabi Weight Loss Challenge . The details -- I am challenging a good friend in the swing state of Florida (and any other voters who are interested) that I can get my weight under 200 lbs. before the election. That is, that I will lose 42 lbs in only 93 days. If I am successful, then my friend who is planning to vote for George Bush will vote instead for John Kerry. That's right one more vote for Kerry! This will be a real test, but it should be fun trying to make it. Of course it's for a VERY noble cause. Any suggestions to help me in this important effort are appreciated. Just leave a comment. Meanwhile, I will keep you posted on my prog