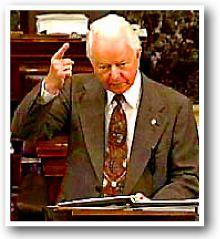 The Republican attack machine has started early for an election that won't occur for another 16 months. The National Republican Senatorial Committee is now running an attack ad against WV Senator Robert C. Byrd. (Video here.)

The ad is misleading and obviously from the same playbook that the Republicans have been using over and over again.

The ad claims that Senator Byrd voted against the troops, because he voted against a nation building bill for Iraq that was full of questionable spending.

It's a ludicrous and misleading claim, because Senator Byrd proposed an amendment to the bill that would have provided INCREASED funding for the troops.

Senator Byrd's critics have often complained about him bringing federal projects and so called "pork barrel" funding to West Virginia, but President Bush and the Republican-led Congress apparently prefer that taxpayers pay for pork barrel projects in Baghdad.

Senator Byrd wanted to put the money where it would do the most good in protecting soldiers. He even proposed an amendment that would have increased the amount of money going to body armor and securing conventional weapons, which are responsible for most all of the deaths of US soldiers. Unfortunately, Republican Senators defeated the amendment resulting in LESS money for body armor.

Senator Byrd wanted to spend more on the things soldiers needed and less on things like:As Senator Byrd noted in his remarks on the amendment,

"According to the Congressional Research Service, if we purchased those petroleum products at market prices, it would cost $704 million. I wonder who is profiting from this sweetheart deal at the U.S. taxpayers’ expense."

Senator Byrd wanted more money for protecting our troops, not less. His amendment even mirrored the Republican-controlled House Appropriations committee which found $1.65 billion in questionable and unnecessary expenditures.

As the Senator noted,

"The President’s budget request includes only $300 million in a catchall account that lumps munitions security in with critically needed bulletproof vests and the rapid fielding of technological advances. This is the same budget request that includes $697 million for sewage improvements in Iraq, $150 million for the aforementioned garbage trucks and landfill sites, $200 million for an America-Iraqi Enterprise Fund, and $110 million for something called Market Oriented Specialized Training."

Senator Byrd proposed $600 million more to secure and destroy conventional weapons in Iraq, thus tripling the amount ($300 million) that the President proposed, yet Republicans claim he voted against body armor and voted against our troops?

He wanted to support our troops and protect them from the ammunition that was killing them. The President apparently wanted to buy garbage trucks and import oil to Iraq.

Stating that Senator Byrd voted against funding when he proposed an amendment to increase that funding is misleading, offensive and typical.

It's unfortunate that the first ad is not in support of something or someone. It's entirely an attack. The Republicans don't even have a nominee, yet they are attacking Senator Byrd. So much for a positive, issue-based campaign.

Instead they're just going to make the Senator angry, so he will want to campaign that much harder. Personally, I think they picked a fight with the wrong guy.