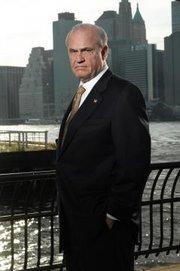 According to this story, former U.S. Senator and Law & Order star, Fred Thompson, will help President Bush push through his nominee for the Supreme Court.

Although I disagree with Thompson on many of his political views, I respect where he's coming from.

He has a law degree and served as Counsel to the Senate Judiciary Committee during Watergate. He was responsible for former Senator Howard Baker's question that helped topple President Nixon, "What did the President know, and when did he know it?"

He went on to pursue a Tennessee Parole Board case that helped stop Governor Ray Blanton from selling pardons and led to his early departure from the Tennessee Governor's Mansion.

During the 80's he began a successful movie career before being elected to Al Gore's former seat in the Senate. He retired from the Senate in 2002 and has been on Law & Order since.

Having said all of this, I wonder if this process will be like Dick Cheney's selection as head of the VP search committee for George Bush in 2000? Will Fred Thompson become the nominee? As a former Senator he would likely sail through the confirmation process.

It may be my Tennessee roots shining through, but I think Thompson might be a good choice. Another good possibility would be Fred's good friend and another former Tennessee Senator, the "Great Conciliator", Howard Baker.
In the news