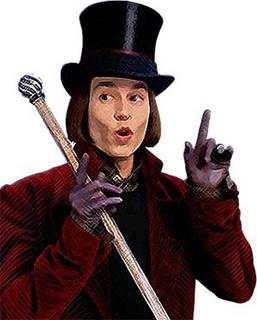 We watched the new version of Willy Wonka and the Chocolate Factory last week, and it was much better than I thought it might be.

Johnny Depp is really good as Willy Wonka, and Charlie's family has some very funny lines. One of the Grandma's was especially hilarious.

There are a few flashbacks to see how Willy became a famous chocolatier.

I enjoyed the movie, and there's a twist at the end about Charlie's relationship with his family that was nice.

One change that would have made it even better -- make it a true sequel.

You could have Johnny Depp play Charlie Bucket as an adult sending out Golden Tickets like Willy Wonka did in 1971 to find his own successor.

That would have smoothed over the purists who love the original, and still kept alot of the fun in the new movie.
Movies